A bumper entry of 80 players converged on Castletown’s superb bowling surface to battle it out for Sunday’s annual Ballacashtal Cup competition which, together with South Ramsey’s Kernan Trophy, always heralds the start of the June Bowling Festival week for the male competitors.

Some magnificent bowling was shown throughout the day and the following quarter final scores typified many of the day’s tight games.

The semis were just as exciting with Johnson falling agonisingly close at 20 against Roberts and in doing so he failed to emulate the successes of his father, Arthur, who won the Ballacashtal back in 1977 and again in 1989.

Bramhall got off to a good start in his game against the exciting talents of the young home player but Clark was equal to the task and he came back well to beat the fancied Kirkham player to 18.

In front of a big – and noisy (for local bowling!) – crowd Bob Clark raced into a brilliant 14-7 lead but then in trying to make a double which could well have sealed the victory he knocked Roberts’ wood in and with edge bowling the George and Dragon man soon pulled himself back to 14-across. The home club captain retaliated and he rallied his supporters by then scoring a double but it was not to be for the 21 year old even though he got back onto his favourite mark as Roberts went on to accept the Cup from the home club’s President, Hilary Kermode, thanks to a 21-18 victory. 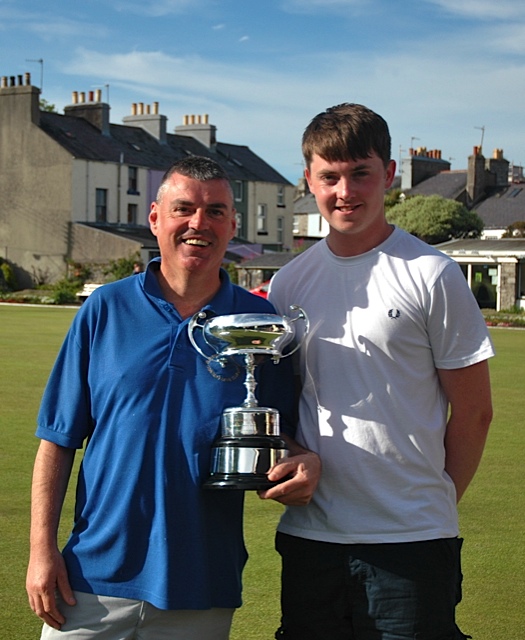