On a fine afternoon in Ramsey Mooragh Park held their ladies’ singles open for the Town Cup. Unfortunately there was a small entry of eight players so games were played to 21 off scratch on a fast green which obviously suited the eventual winner, Lilian Slinger.

In the final Lilian came through to beat Viv 21-14.

The presentation was made by Lady President, Janet Monk, who thanked everyone who had helped in any way during the afternoon.

Despite a forecast of possible heavy showers the weather stayed warm and sunny at Onchan on Wednesday 24 July for the ladies’ doubles competition for the Commissioner’s Cup. A field of 18 pairs produced some close and exciting games particularly at the semi-final stage.

In the first semi-final the game was even until a 3 on the fifteenth end followed by a single gave Casey and Lyn a 19-16 lead. The Castletown pair then dug in to get a single followed by two 2’s to see them through to the final 21-19.

The fight-back was even more dramatic in the other semi as after 16 ends Lilian and Janet held the advantage 20-14. A 2 and a 1 brought Lin and Paula up to 17 then a 4 finished the game off with the Noble’s Mixed pair going through 21-20.

The final stayed all square to 12-12 on end 8. From then Lin and Paula took control allowing Kath and Marie just one more single before running out 21-13.

Marown A beat Douglas A at Finch Hill bowling green on Friday evening to win the coveted Canada Life International Rayner Shield for a third successive year, in arguably the most dramatic final ever in the illustrious competitions history.

It wasn’t a bowling match it was a war, with the challengers throwing everything in their arsenal at the defending champions who fought to the death as if their lives depended on it. The teams on paper looked evenly match, and on the impeccable yet tricky playing surface things were even closer.

Marown took the initiative in the early stages with Colin Kelly drawing first blood for his side with a 21-10 win over Keith Rise. The next three games came off the green in quick succession with Marown moving further ahead thanks to wins from seasoned campaigners John Gelling and Phil Kelly, but then something happened.

Stuart Garrett picked up a superb 21-18 win over June Festival winner and Marown Captain Neil Withers to give his side hope, and the Douglas troops responded brilliantly to this rallying cry with Paul Skelly and Matthew Keggen notching up wins to draw the challengers level. The balance of power seemed to be swinging towards to underdogs.

Then there was another twist in the tale as Mike Cain, who had trailed by a couple of points for most of his game, edged passed Douglas Captain Mark Kneen 21-19 to leave his team needing only one more win to retain their crown. With the two remaining games on the green finally balanced the scene was set for an ending so suspenseful that it could have been scripted.

Paul Kelly moved through the gears and held his nerve brilliantly to see off the challenge of Peter Kelly 21-16 to keep his team in the running leaving everything resting on the game between Ian Moore (Douglas) and Dean Kipling (Marown).

Moore was ahead 20-17 and led out to try and bring home the trophy for his team. He headed straight for the corner however he got a little tight with his first bowl and it just went off the green. Last years division 1 merit winner Kipling capitalised and played a great bowl which Moore just failed to beat with his second. Kipling then picked up a two to tie the scores at 20-20.

Kipling put up two brilliant woods to leave Moore lying game down but he held his nerve and with everything resting on the fate of his final bowl he struck the jack off the green, killing the end and keeping the Douglas hopes alive in the process. However it was not meant to be for the challengers as Kipling, who seemed to thrive in the pressure cooker atmosphere, led magnificently and picked up the final point required for a Marown win.

It is heartbreaking for Douglas who came so close to winning the shield for the first time in over 50 years, but it wasn’t meant to be. Marown just had the edge by the smallest of margins winning 5-4 on games with the scores ending 167-165 on points in a match that had everything. In sport there are always winners and losers and Marown are brilliant champions but Douglas are far from losers after this performance, the real winners on Friday night were those lucky enough to watch this epic encounter which I am sure will be stored in the memory banks for years to come. 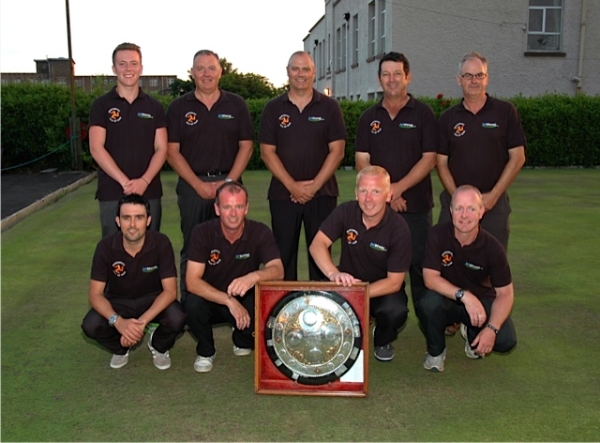 Runners Up (Douglas A) 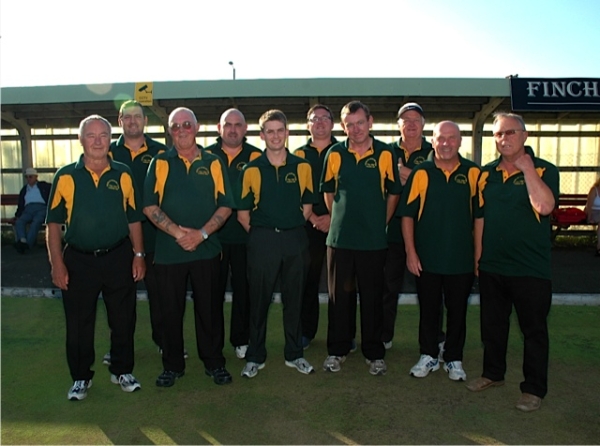 There was an entry of thirteen teams for the Millennium Fours played at Noble’s Mixed on Saturday 20 July on a warm sunny afternoon.

The format of play was a doubles and two singles in each match, the protagonists chosen by lot by the organisers, the total scores from the three games giving the team total.

By the semi-finals the competition was hotting up with two close games, both depending on the result of the doubles. The Noble’s Mixed team, comprising Clare Cooper, Paula Firth, Lin Ruscoe and Rebecca Teare, had a 4 point lead going into the doubles where Lilian Slinger and Chris Price needed to win 15-10 to progress to the final. In the event the Noble’s Mixed pairing of Clare Cooper and Paula Firth won by that score to take their team through 45-35.

In the other semi-final where a combined South Ramsey and Douglas team of Casey and Lyn Bolton with Harley and Paula Garrett, met the Ballaugh team of Ann Gale Jenny Maddrell, Mary Simmonds and Jane Teare, the scores were level after the two singles meaning that whichever team won the doubles went through. In a tense match Ballaugh came through to take the doubles 15-14 to take the match 42-41.

Two wins to Noble’s Mixed in the singles meant that Ballaugh would have to win the doubles 15-2.In a close match they did win but not by the required margin to give Noble’s Mixed victory 43-33.

The presentation was made by Association president, Jenny Maddrell, who thanked all those who had taken part and helped in the smooth running of the event.

The Clague Kermeen was played on Saturday 20th July in glorious sunshine with 28 men taking part. 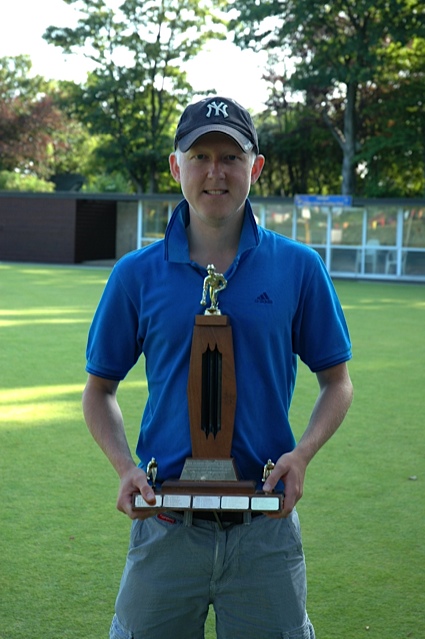 The Dreswick Cup, sponsored by the Albert Hotel, Port St Mary, was played for on Port St Mary Green on Thursday 18th July and attracted an excellent entry of 46 competitors.

The weather was hot and sunny and the Green was in superb condition and the bowling throughout the day was of a very high standard.

At the conclusion of the competition the prizes were presented by the sponser Mr Pat Omeara, from the Albert Hotel. 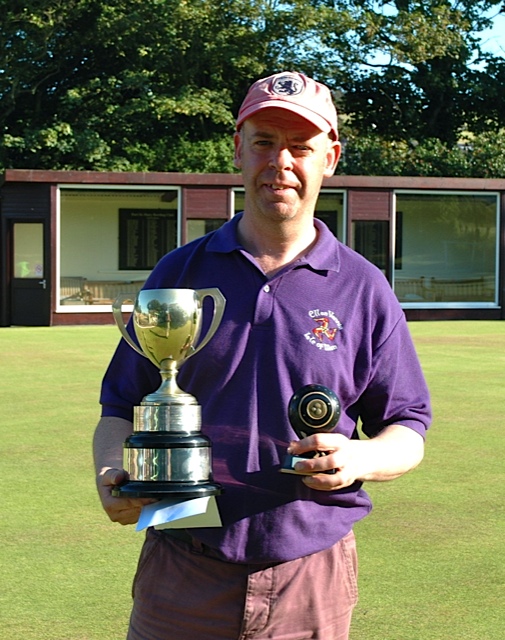 Holders Marown A and challengers Douglas A are set to face off in the final of the Canada Life International Rayner shield on Friday after they both picked up superb away wins to book their final berths.

Marown became the only the second team in 10 years to defeat Onchan A at the park with man of the match performances from Peter Kelly and Mark Moorley as they picked up respective victories over Phil Kerruish and Glynn Hargraves. The rest of the team worked well and the final nail was put in Onchan’s coffin by young Luke Hyland who came back from 19-11 down to win 21-19 against Peter Karran and seal a 6-3 win for his side.

Douglas had the tricky task of travelling to Castletown A and despite trailing 2-1 put in a masterful performance to finish 7-2 winners. It looked like it was going to be a lot more difficult but after Ian Moore held his nerve to finish off a great 21-19 win over Bob Clark, and Ken Williams waded in with a 21-16 win over Tony Dugdale momentum swung towards the visitors.

It should be a magnificent final with two of the top teams in the league competing for the magnificent shield.

There was a turnout of 35 pairs for the tournament with some excellent bowling throughout the day but it was David Bradford and Nicola Kneale, playing in her very first competition, that went on to win the event with a resounding 21-11 victory over Phil Kerruish & Amanda Lawler in the final.

At the conclusion of the event, John Keenan, Vice President of Ballaugh Bowling Club, presented the trophy and prizes after paying particular thanks to the generosity of SPAR, the sponsors for the second year.

David Bradford was the worthy winner of the magnificent Ramsey Town Cup at Morragh Park on Saturday with a dominant 21-9 final win over Paul Leece. Bradford got ahead and stayed there and on this occasion was too good for his opponent, who must also be commended as he played excellently all day to reach the final.

In the Semi- Finals Bradford knocked out newcomer Geoff Porter 21-11. Porter may have fell short this time but he is one to watch after only just taking up the sport this season. In fact in his quarter final he eliminated Island Champion Glynn Hargraves 21-13 which goes to show the progress he has already made!

In the other Semi-final Leece had his work cut out against the hard to handle Syd Bolton before progressing with a narrow 21-18 win. Other Quarter finalists were Brian Colquitt, Tony Smart and Peter Collister. At the conclusion of the competition prizes were presented on behalf of Ramsey Town Commissioners by Dr Alanson, head of parks and leisure. 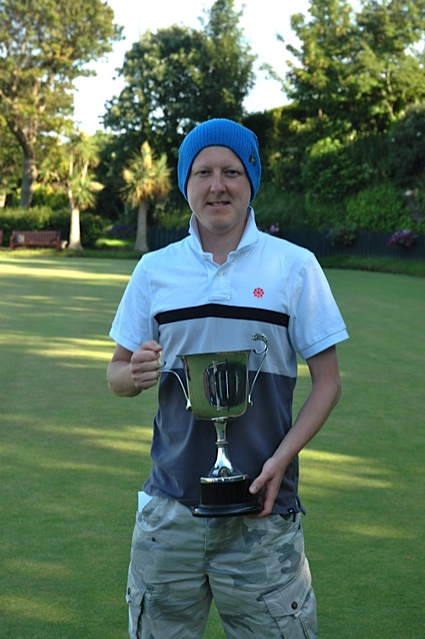 The morning mist cleared to give a fine afternoon at South Ramsey on Saturday 13 July where a field of 25 gathered to compete for the Omega Cup. The very fast green did not suit everybody but games were played in good spirit punctuated by gasps of disbelief as woods trickled off the edge.

With games starting off 3 the final started with the players matching each other up to 9-9 when Lyn went into a 13-10 lead. Jenny then got hold of the jack and gave a thrilling exhibition of playing a fast green which, despite Lyn also playing some good woods which did not count, took her through to win 21-13.

The presentation was made by Ladies’ President Moira Anderson who thanked everyone who had contributed to the success of the afternoon.