Stuart Garrett was a class apart as he won the revitalised Veterans Merit competition on Saturday at Port St Mary beating home greener Ron Maycox 21-14 in the final. Garrett asserted himself from the off in the final playing exceptionally well to build an unassailable 18-8 lead. Maycox who is a great competitor did not give in and dug deep to claw his way back into the game, however the bridge was far too big for him to build and he went down to a worthy victor.

It is fantastic to see this competition running again after being cancelled in recent years due to lack of numbers, and with entry numbers being above the required minimum next year’s winner should qualify to travel to the UK to play in a national competition. With all the recent success of junior initiatives it is great to see the more senior side of our sport go from strength to strength.

Garrett made the final thanks to a strong 21-11 victory over Douglas stable mate Ken Williams in the Semi-Finals with Maycox dispatching fellow Spaniard Ray Maddrell 21-12. Fallers in the quarterfinals were Mike Hargraves, Louis Callister, Ann Maddrell & Rita Callister.

At the conclusion of the competition IOMCCGBA Vice President Phil Kerruish presented the prizes and thanks Port St Mary for the excellent condition of the green and all their support in running the competition and catering. 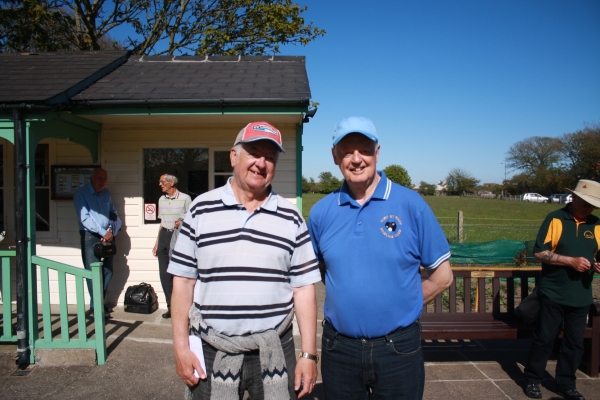