Glynn Hargraves picked up his second Canada Life International Manx Championship in as many years as he defeated Onchan team mate Kevin Quirk 21-16 at Castletown Bowling Green in a repeat of last year’s final to retain his title. Hargraves was in spectacular form all day playing with the experience and composure of a seasoned champion, and even on the rare occasions that he found himself in trouble he never seemed to lose focus or belief and just played his own game.

Quirk himself a double champion, also played his part in making this a magnificent championship and put in some excellent performances on his way to the final. If anything though his success over the day is a testament to his resilience as despite not always being at his brilliant best he managed to grind out wins and almost pull off his third championship victory, falling at the last. In the final though, after initially falling a few points behind, Hargraves found his form and never allowed his opponent to fully settle, keeping him out of his devastating rhythm and in turn finding his own.  Both finalists have been at the top of their games in recent seasons and you wouldn’t bet against either of them completing their hat-trick of titles next year.

To reach the final both players had to dig deep in the semis as they both trailed moving into the closing stages of their encounters. Hargraves found himself 17-14 behind against former champion Phil Kerruish (Onhan) but had the wherewithal to see the game out finishing it off 21-18. Quirk as mentioned above showed the resilience of a great champion to overturn a similar deficit to beat Paul Skelly (Douglas) 21-19.

Kerruish and Skelly both played magnificently all day and Kerruish’s crushing 21-11 quarterfinal victory over competition favourite and seven times Champion John Kennish was just one of the days many highlights. In the other quarter finals Skelly eliminated Chas Grills (South Ramsey) 21-6, Hargraves progressed with a good 21-13 win over perennial quarterfinalist Mike Cain (Marown) and Kevin Quirk just managed to see off the challenge of Neil Withers (Marown) 21-19.

The whole weekend was one of personal achievement for Glynn who had the previous day coordinated and administered the sports inaugural inclusion in the Manx Youth Games, which was a massive success. Few people know this but just four years ago he seriously contemplated packing in the sport as he was becoming frustrated and disillusioned with it, and it was actually his success in this very same competition, just losing out in the final, which gave him the impetus to carry on and go from strength to strength. It would have been a total travesty for bowls if he had decided to quit and his decision to carry on has been invaluable for the development of the game due to his work off the green, which incidentally seems to have improved his form on it!

At the conclusion of the competition Isle of Man County Crown Green Bowls President Steve Moore presented the prizes and thanked both Castletown Bowling club for their assistance in running the championship and Canada Life International for their continued support of the Islands premier completion. I would also like to thank new Association Competition Secretary Matthew Keggen who did a magnificent job of organising the competition at the first time of asking. And his continual work behind the scenes is dragging our sport kicking and screaming into the 21st century. At the end of the day however this weekend belongs to Hargraves and the only thing left to say is “well done mate, you deserve it”. 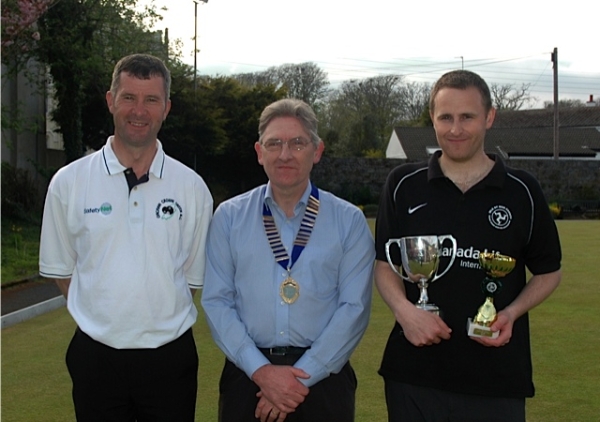