The Canada Life International Rayner Shield final was held at Douglas Bowling Club on Friday evening, between South Ramsey A and Marown A in a match which was billed as ‘Thriller at the Villa’, with the current top two teams on the Island going head to head it certainly lived up to its billing. The green was in superb condition, especially considering the weather we have had this week.

First off the green for South Ramsey was John Kennish, who stormed to a 21-6 win over Dean Kipling with the score not really reflecting the game. Hitting straight back for Marown was Colin Kelly who had a resounding 21-5 win over Chas Grills. The third game off was David Bradford, who after being 14-5 up Ian Kissack managed to pull the score back to 14-10 down, before Bradford seen the game out 21-10. Next off was Glynn Hargraves who defeated Matthew Keggen 21-6 to give the Ramsey men a 3-1 lead at the half way point with a 25 advantage on chalks, it looked like the Shield would be heading North for a third consecutive year.

Marown had other ideas and hit back in the second half of the match, knowing unless they had a couple of big wins they would need to win the match 5-3 on games, as the chalks heavily favoured South Ramsey.

Fifth game off was Phil ‘Rambo’ Kelly v Alan Moore, who pulled out a superb bowl when 13-7 down with Moore lying two. From there Rambo came back from 17-12 and 19-14 down to see the game out 21-19 to give the Crosby men some hope. With the tension building around the green the next game off was John Gelling v Dido Kelly, with Gelling having a commanding 14-5 lead Kelly got himself back into the game with a good run to level the scores at 18-18, with Kelly lying two good bowls Gelling played a superb bowl to win the end and take a further two singles to win 21-18. In the penultimate game and one of three key games in the second half with the games being so finely balanced, it was Paul Dunn v Stefan Kelly, with Dunn behind all game at 13-7 and 17-13. With the score at 18-15 to Kelly, who had two bowls inside 18 inches Dunn played a superb bowl to win the end, and then finished the game on a longer length mark to see the game out with a vital 21-18 win. This left Marown needing only one more chalk to secure a great comeback and a famous victory with Neil Withers being 20-9 up over Peter Collister, Withers quickly took a 21-11 victory to secure the Rayner Shield for the Crosby men.

The presentation was made by Adrian Skinner on behalf of the competition committee, who thanked the sponsors for their continued support all those who helped and Douglas for preparing an excellent playing surface, he then introduced Marown captain Neil Withers, who offered his commiserations to South Ramsey and congratulated his team for their efforts on what was a great comeback.

The 2017 Manx Championship takes place over the weekend of Saturday 20 May, with the Nobles green in superb condition, this promises to be a great weekend of bowls. The competition is traditionally played down to the last 16 on the Saturday, then played down to the winner the following day.

Obvious favourites given their previous festival successes on this green are John Kennish (South Ramsey), who will be looking for title number 10, Colin Kelly (Marown) with five wins to his name, and David Bradford (South Ramsey) who will be keen to add to his 2015 win.

Others who have previous Manx Championship successes under their belt over ‘recent’ history, and will be keen to add to their tally are Andy Kennish (3), Kevin Quirk (2), Glynn Hargraves (2), Neil Withers (1), Ewan Cooil (1).
There has been only eight different winners  over the past 20 years, however there are players who will be looking for their first championship win, with David Kelly (Peel), Dido Kelly (South Ramsey), Trevor Quayle (Port St Mary), whilst looking at the ‘younger generation’ Matthew Quirk, Jordan Cain and Rob Monk (all Onchan), Paul Dunn, Matthew Keggen and Bob Clark (all Marown), and Paul Skelly (Port St Mary) will all be looking to pick up their first win.

That said it may well be a name not already mentioned that is crowned Manx Champion, with a few capable of beating anyone on their day. What I can guarantee is a few shocks along the way.

Entries close on Thursday 18th May at 2pm. Remember you’ve got to be in it to win it.

I am running out of superlatives to describe Kennish who has been the Islands number one player for what seems like an age, and has a trophy cabinet that contains more silverware than you would find in Wilkins Jewellers, and the best I can come up with is imperious.

He is quite simply imperious. His authoritative, commanding displays particularly in the semi-final and final are unprecedented on our shores and quite simply when he is at his best it seems almost impossible for anyone to match him.

Kennish doesn’t win all the time, others have their day and take nothing away from Kelly who himself is a great multiple champion and is in my opinion without question the second best player we have ever produced however like any supreme champion Kennish just seems to have more days than anyone else and Sunday 22nd May 2016 was another one of those days.

In the final he was in control from the off and with the rubs of the green also going in favour of Kennish there was little Kelly could do as his opponent seemed to eclipse the jack with every lead he sent, forcing him to play running bowls which either found the gap or when he did hit didn’t fall his way.

In the Semi Finals Kennish put in a superb display to see off defending champion David Bradford 21-8 whilst Kelly was also dominant seeing off the challenge of the inform Matthew Keggen by the same score.

In the quarter finals Kelly was made to battle all the way just getting the better of ex home greener Jordan Cain 21-18 after an epic tussle. Kennish was again on his game seeing off North Ramsey’s Steve Parker 21-7, however despite the score line it was a magnificent performance and achievement for Parker to make it this far after only taking up the game a few years ago. Bradford ended the challenge of Port St Mary’s Paul Skelly 21-13 to book his semi-final berth whilst Matthew Keggen beat Onchan teammate Phil Kerruish 21-12 at the same stage.

Looking back at it the weekend was a fantastic showcase of the Islands top bowling talent with 58 players turning up to make their bid for glory hoping that it will be their name etched into the history books, however there was an all too familiar end to the story with Kennish being crowned King once again! 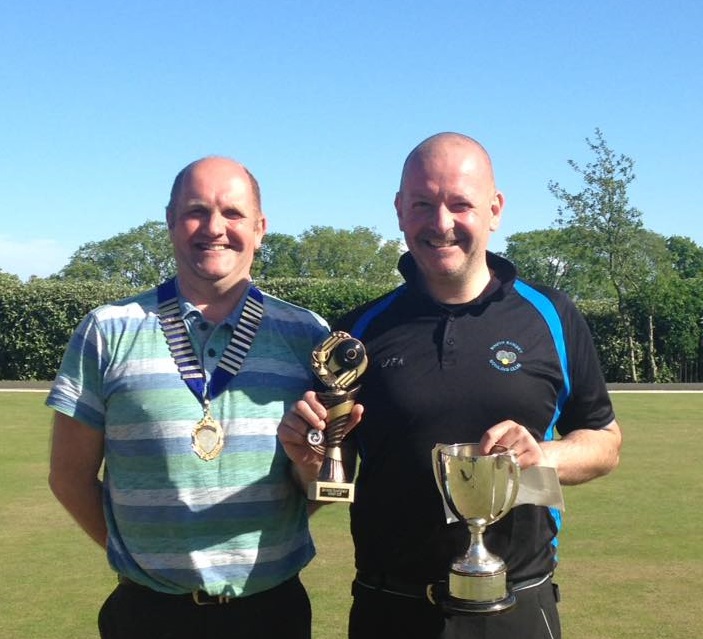