Raymotors Mooragh Park Ladies travelled to Todmorden at the weekend to play in the British Crown Green Ladies Bowling Association Club Championships (qualifying is through winning the leagues per County), 16 Counties were entered in the Competition.  Mooragh Park were drawn in Group 1 against Bolsover Castle – North Derbyshire, Hatton – Burton & District and Dilhorne – Staffordshire.  In extremely cold and windy conditions the Mooragh Park Team started positively with a very good win over Bolsover Castle 103-70.  Second game saw a strong opposition of Hatton who they played last year, this was a closer game with a winning outcome of 102-91.  Third game was Dilhorne a team who qualify on a regular basis and look to be the strongest opposition, this was proved in the result and after a very hard fought contest MooraghPark just lost by 10 points, score 106-96.  But to the delight of the Isle of Man team, even with the loss against Dilhorne, they had the best aggregate which meant they went through to the Semi-Finals.  After waiting half an hour for the other groups to finish their qualifying rounds, Mooragh Park knew they had a tough game against previous winners St. Oswalds who had players in their team of a very high standard.  Now feeling very cold and tired the IOM team gave it their best, but unfortunately were beaten by a very strong opposition 115-69.

Helen Martin – Captain said “I am very pleased of my team’s achievements to get to the semi-finals of this prestigious event, they all proved that even though we are a small Island, we have some very good players who can compete with the best in England, we flew the Manx flag with pride, well done to all the Mooragh Park Ladies, for getting to the semi-finals for the second year”.  Final result – New Mill (Yorkshire) 103 v St.Oswalds (Cheshire) 92. 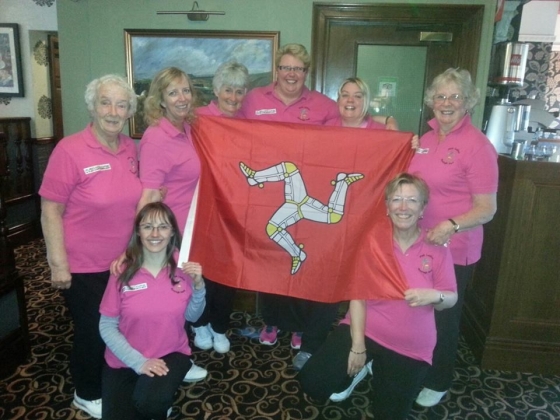