There was a good entry of 32 for the Pearl Kaighin ladies’ singles played at Ballaugh on Saturday 25 April, where the sun shone but the weather stayed cold, particularly for the later stages.

The green was interesting, running well but it helped to have the jack!

In the semi-finals Margaret found a mark that she played well with Lilian struggling to respond, while the other semi-final was closer with Philippa having the advantage but Sylvia did not give up easily.

Margaret was in imperious form in the final, playing a long mark then leaving Philippa little room to get in despite her trying everything she could to change the course of the game (I did think turning cart-wheels on the crown a little excessive)

Club chairman, Jenny Maddrell, thanked those who had entered and those who had stayed to the end before introducing Bernard Kaighin to make the presentation, thanking him for his continued sponsorship of the competition. 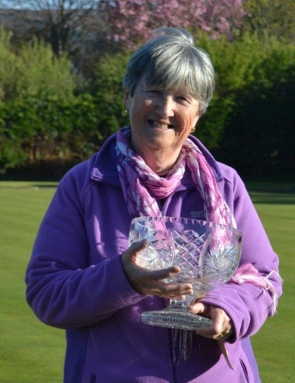