Kennish is the King of Crown

John Kennish became the first Manx Man ever to win back to back main festival titles, as he added the coveted June title to the one he won last September, and his two previous September wins.

What makes this achievement even more breathtaking is that he was handicapped from his previous victory and giving the field a three point start in most games he played.

It’s hard to put into words how amazing this feat is, especially with arguably the strongest line up in recent memory out to stop him.

If truth be known it was a workman like performance from the South Ramsey man for most of the week, finding crucial bowls when he needed them and doing enough to keep him in the competition ahead of Friday’s finals day.

Friday was a different story however, with him moving through the gears and finding his absolute best. His 21-20 quarter final victory over three time’s winner Ian Nicholson (Victoria) must be a contender for game of the tournament. Kennish led like a champion and Nicholson was determined not to let him have it his own way striking him off on no fewer than six occasions, before he managed to edge home.

He ramped it up another notch in Semis taking out one of the pre tournament favourites John Bailey (Conwy BC) 21-11 to move to within touching distance of his first June title.

In the final he played another Welshman Leighton Roberts, a stable mate of Bailey’s, and was simply mesmerising and in control from the start as he notched up another 21-11 victory to end his wait for the prestigious June crown.

Let’s not take anything away from Roberts though he was brilliant all week ending the challenge of all that stood in his way, before falling at the final hurdle. In the Semi-Finals he ended the challenge of Port St Mary’s Ewan Cooil, who himself had a tremendous week, 21-12 after knocking out Ryan Prosser (KVG) in the quarters.

In the ladies main event Tracy Wraight (Kirkham Cons) surpassed all expectation with a simply brilliant day in the sun, and rain, to lift the trophy. In the final she was on top of her game as she saw off the challenge of last years winner Alexi Lunn-Gadd 21-13.

Mooragh Park’s Janet Monk was picked up the trophy for furthest Manx woman in the competition with another great showing, losing out 21-16 to Lunn-Gadd in the semi-finals. Lets also spend a moment to congratulate the evergreen Lillian Slinger, Janet;s mum, on yet another finals day appearance as she made it to the quarter finals.

There was more local success the day before with South Ramsey’s Jenny Moore, Kennish’s niece, keeping it in the family as she was on fire to take the ladies tourism title with a 21-15 victory over visitor Veronica Lyons. Jenny picked up some great scalps along the way and was in imperious form throughout. She was joined in the last eight by teammate Lyn Bolton who narrowly lost out 21-17 to Jackie Owne (Whitfield BC).

Bookies favourite Callum Wraight from Shropshire took the men’s tourism title to set up another family affair, with his mum taking the main title the following day. In the final he beat Chris Kelly (Thongsbridge) 21-14 after getting the right side of a 21-20 after a ding dong battle with Owen Jackson (Kirkam Cons) the previous round. Onchan man Kevin Quirk was the only local to make it to the latter stages going out 21-11 to Jackson in the quarters.

The open double as always proved one of the most popular competitions of the week with entries selling out within minutes of opening. This year’s winners were Warwick & Worcester pairing Jon Palmer & Gareth Herbert who were victorious with a 11-7 win over Gaz Lalley & James Wilcox (Crossgates).

All of the other doubles competitions also proved as popular as ever with Ryan Prosser & Tom Prichard (KGV) winning 11-7 against Harry Hargreaves (Rishton) & Stuart Garrett (Douglas). The mixed doubles were won by Grahem Moore & Alexus Lunn-Gadd who saw off the challenge of Vinnie O’Donnell & Veronica Lyons 9-5.

Matthew Keggen (Onchan) put in a great performance in the consolation competition getting to the semi finals before losing out to Jon Marshall (Callow BC) 21-18. The competition was won by Nigel Hughes (Wirral) who beat Marshall 21-18.

Thanks as always got to Steve Moore and his team who did a great job in organising the best festival in the bowls calendar. Thanks must also go to the Department of Economic Development and Manx Telecom for their continued support of the competition. There really was an electrifying buzz of anticipation and excitement all week and with numbers fifty up on last year, and the reach of the Island lengthening it seems these tournaments are set to flourish in coming year.

When all is said and done there were plenty of other great performance, some of which I couldn’t mention, from both visitors and locals alike but all of the plaudits surely belong to John Kennish, who was quite simply brilliant. It is almost impossible for me to quantify quite how hard it must have been to win off a handicap and how strong the line was this year. If he wasn’t before he must now be regarded as the greatest Manx Bowler of all time. What ever era or what ever school of thought you belong to you must now take your hat off and applaud John Kennish – the King of Manx Crown. 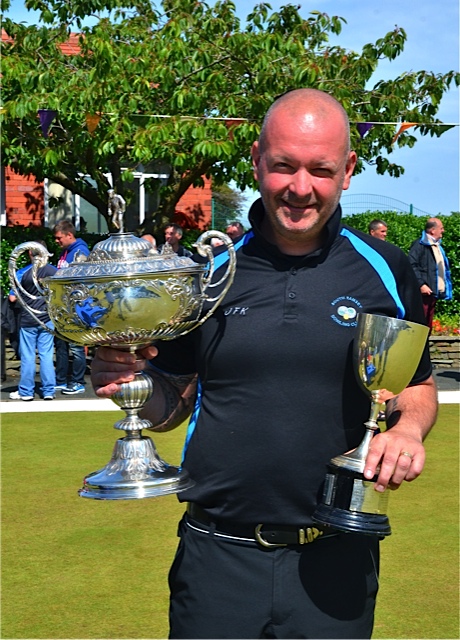